The Girard Wing opened in 1982 with the long-term exhibition Multiple Visions: A Common Bond, an awe-inspiring display of approximately 10,000 pieces of folk art, toys, miniatures, textiles, and more from the Alexander and Susan Girard Collection. More than a million visitors have delighted in this exhibition, which represents just 10% of the Girard’s immense collection. This unorthodox exhibition was designed by Alexander Girard, a renowned designer who worked for Herman Miller. It features objects displayed within vignettes of Girard’s invention or installed at various heights, including hanging from the ceiling. Girard insisted upon a pure visual experience, rejecting the use of object labels, using bold areas of painted color to delineate different sections of the exhibition, and often juxtaposing objects from very different cultures. Multiple Visions has been a perennial favorite of visitors for more than 30 years. 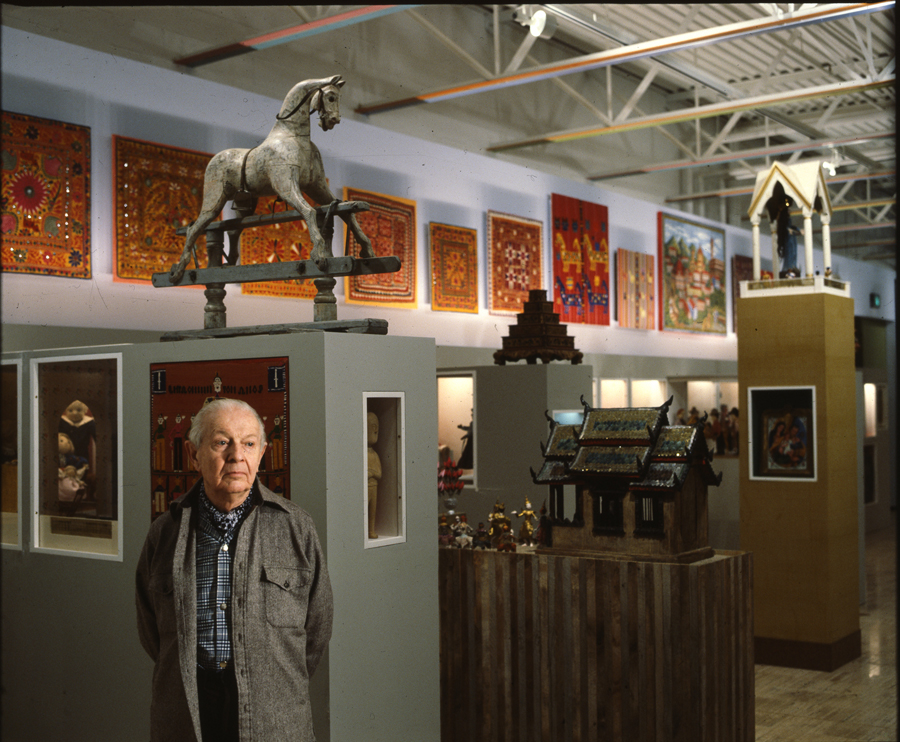 As with Florence Dibell Bartlett’s collection, the Girard Collection reflected a lifetime of travel and a love of objects. They began collecting on their honeymoon to Mexico in 1939, selecting objects for their beauty, humor, whimsy, and directness. Visitors to the Girard Wing are greeted by the Italian proverb  “Tutto il mondo e paese” (The whole world is hometown), a saying Alexander Girard liked to quote and which was a guiding principle of his and his wife’s collecting of folk art. Although there are no object labels, if they choose to, visitors can learn more about the objects in Multiple Visions through a printed gallery guide that corresponds to numbered cases or a free hand-held multimedia tour on an iPod touch. In the near future, additional options for interpretation will be developed for visitors to explore Alexander and Susan Girard’s visionary collection in greater depth.

The remaining 90,000+ objects in the Girard Collection comprise an important part of the museum’s 130,000-object collection and represent more than 100 countries on 6 continents. These objects are frequently included in special exhibitions that are based on our holdings.