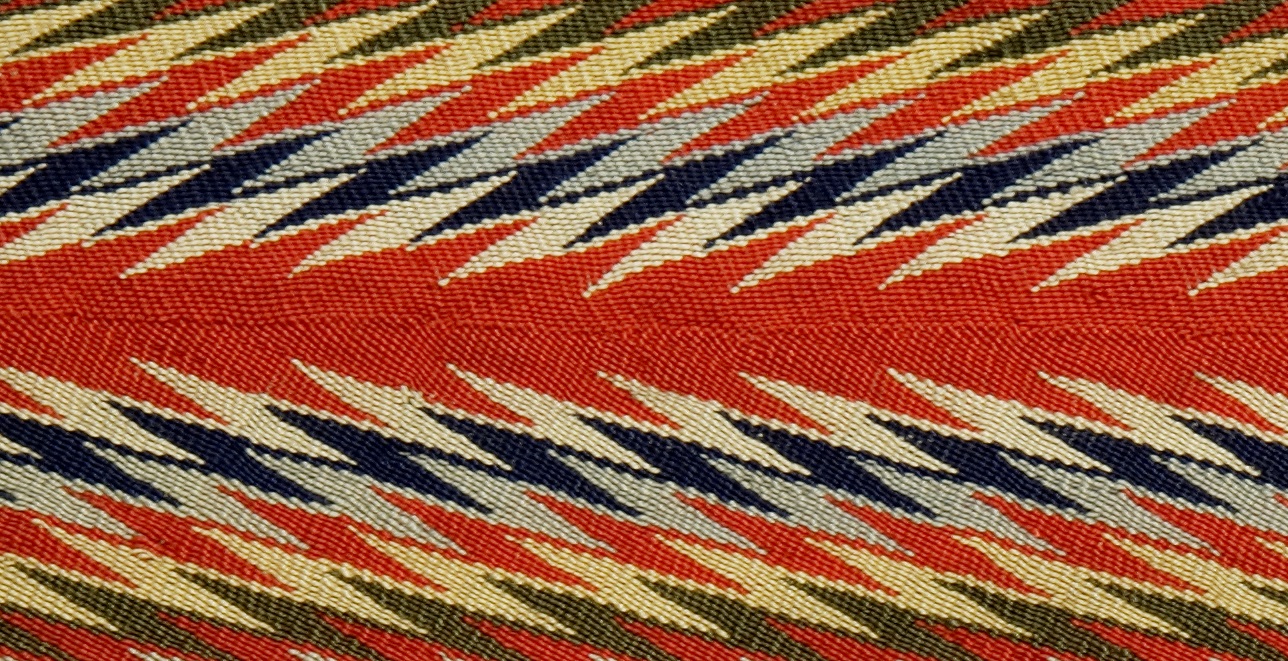 An Assumption or Assomption Sash (arrow head, central heart with thunder bolts), formerly named "flame sash." It is the best known of all Ceinture Fléchée motifs.

While perusing the Museum of International Folk Art's Online Collection, my eye stopped on a familiar image. It was a multicolored sash that I grew up with in Québec, Canada. It was a symbol of domestic and nationalistic pride, worn in annual popular celebrations, parades and carnavals. My maternal grand aunts were weavers, rug crocheting and demonstrating the technique of finger weaving, an ancient technique that had disappeared for nearly a century. It was resurrected in 1967 (Montréal EXPO 67). Mrs. Phidias Robert, an octogenarian was showing how to make a Ceinture Fléchée. She had learned the disappearing technique in 1925 from Mrs. Odilon Vigneault, who was then 72 years old, from the rural area of Saint-Ambroise de l’Assumption. Many admirers remembered the technique taught in Home Economics class, associated with our grandmothers and great grandmothers.

The ceinture fléchée has been associated with French Canadian woodsmen and trappers as a form of identity. 19th Century paintings (i.e. those of Cornelius Krieghoff) show men and women wearing the sash on top of their winter coats. The mascots of Québec Winter Carnaval always wear a ceinture fléchée. The renaissance of the fléché in the 1970s gave way to the foundation of the Association of Artisans of Ceinture Fléchée. Members published booklets on the technique and diversified the application of this traditional art in many new utilitarian objects.

FOLK ART TRADITION
Many believe that an authentic ceinture fléchée is woven on a loom...NO! They are completely "finger woven" -- that’s the expression used. On the other hand, there are large numbers of imitations; they are made on looms. Prior to 1888, the fléchée was in Assumption a real industry. The weavers were producing hundreds of ceinture fléchées a month for The Hudson Bay Company. (They served as exchange items with Native Canadians of the West.) The parish priest of Sainte-Marie Salomé de l’Assomption joined the weavers in their demand for better monetary and working conditions and the company refused them. As a result, the Company ordered imitations done on power looms in Coventry, England. This decision stopped completely the fléché sash production and caused the quasi disappearance of the "finger weaving" in Québec.

TECHNIQUE
The real fléché sash is made the following way:
The treads, in variable important numbers, are stretched on two fixed 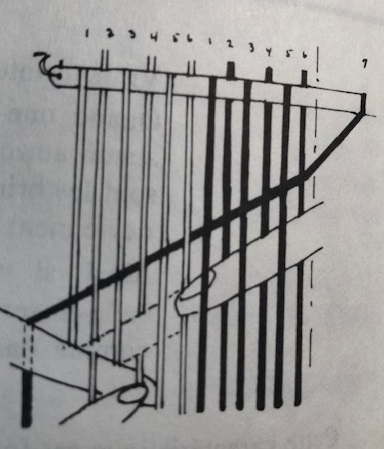 points (on a wall, on a chair, etc.) but in a diagonal position – one side should be lower than the other. It is a method that requires no tools except two crossing sticks used in weaving. Their use is to maintain the treads flat. The artisan can work standing or sitting. The trick is to interlace treads with the fingers according to the chosen motif. There are five authentic types of motifs for the sash. A sense of creation from yesteryears or contemporary modifies or not these motifs:

1. The chevron, V design and its variations (jarretière de Charlevoix)

5. Acadian (two Assomptions side by side)

Authenticity and Quality
A finger-woven sash has no weft; it is the moving chain tread that becomes the weft. If you follow the path, it will be diagonal, not horizontal as in

regular weaving. This characteristic is fundamental. Thickness of the wool is not a criteria of authenticity. However a tighter texture and pliancy are appreciable qualities. One should not depreciate the work involved in the fabrication of a loom fléché sash, it is different. Weavers have diminished the cost of fabrication without losing the spirit of the fléché sash.

Criteria for a Traditional Sash
LENGTH: In the old days, the length of the sash was twice the waist line. 6 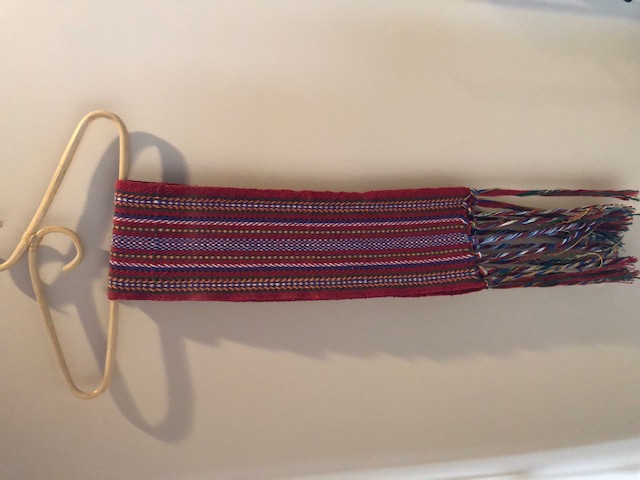 feet (1.83 m.) without the fringes which should depend on the height and size of the person.
WIDTH: From 4 to 5 inches (10,16 to 12,70cm.)
SOLIDITY: The sash must be tightly woven, the fringe is not necessarily braided but should be tied to hold the weaving.
PRODUCTION: To evaluate the cost of a fléché sash, one has to calculate the time of production. For a 5 in.(12.70cm) width, a length of 1 in. (2.54cm) with fine wool can be calculated. If the yarn is thicker, an experienced weaver can achieve 2 in.(5.08cm)/hour. It can take 35 hours to make an average sash. This is not the case for loom-made sashes. The fléché technique lends itself to other items (ties, cushions, bags, dolls, murals).

REGIONS OF THE WORLD
The origins of the ceinture fléchée are still obscure according to research on this type of weaving by the ethnologist Marius Barbeau and by Cécile Barot and Jean Marie Gauvreau. It would be interesting to compare with other cultures of the world who also use fingers to weave, i.e. Mesquaki, Navajo (dance sash), Bulgarian, Central and South American.

NOTE: It is absolutely forbidden to wash or send to the cleaner an ancient sash because the wool was colored with vegetable tinctures of which the water resistance is unknown. Washing could definitely affect colors.

Lucie Church has taught Art and Design at Concordia University, Dawson College, in her native city of Montréal; and at Texas Lutheran University. She was instructed in the fléché technique in elementary school but her weaving was too loose and her grant'aunts suggested she try again. Instead, she switched to knitting.

Lucie first joined the MOIFA family in 1990 as a collections volunteer.